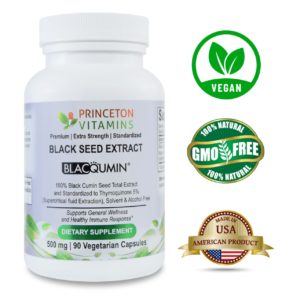 Black cumin, or black seed oil, has been use in traditional medicine for its therapeutic benefits for thousands of years. Traditionally, the fixed or essential oil from the seeds were used to address health conditions ranging from supporting healthy liver and kidney function to soothing skin conditions. It is perhaps best known and most well studied for its anti-oxidant, anti-inflammatory and immunomodulatory properties.

The seeds, also known as black cumin seeds or black caraway, come from Nigella sativa, a plant with pale purple, white or blue flowers native to Eastern Europe, the Middle East and Western Asia.[1] The seeds have also been used as a seasoning to flavor curries, pickles and breads in the same way as cumin or oregano.  Thymoquinone is the active ingredient in N. sativa responsible for most of its health benefits. It is a potent antioxidant and anti-inflammatory that is also thought to provide potential support for many health functions.[2]

It is made with a proprietary Black Cumin seed extract called Nigellin™-BCS Amber, which has been shown to suppress release of the most active cytokines and features an identified prostanoid with anti-inflammatory properties, which may possess a supportive effect with regard to asthmatic conditions.[3] Anti-inflammatory and immunomodulating properties are among the most valued in anti-asthma herbal products. According to the 2018 study in Frontiers in Pharmacology, Nigellin showed the highest effects in suppressing the release of cytokines IL-2, IL-6 and PGE2 in T-lymphocytes and also in monocytes hindering the expression on IL-2 and PGE2. These are among the most active cytokines involved in asthmatic conditions. The investigators noted a positive relationship between the TQ level in the preparations and its inhibitory potency on IL-6 and PGE2.

Most black seed extracts are extracted with cheap solvents like hexane or ethylene dichloride and are cold pressed, which will not produce high thymoquinone content. Nigellin is extracted using the super critical fluid extraction process, which extracts compounds from black seed using carbon dioxide instead of a chemical solvent, and is a more environmentally friendly and gentle process to maintain the active constituents of the plant. 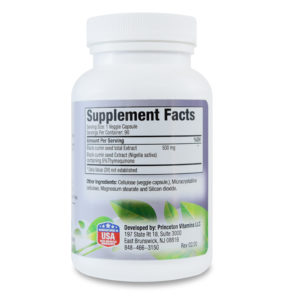 A recent meta-analysis on N. sativa and thymoquinone, its most abundant constituent, suggests that this compound is responsible for many of the useful effects of the herbal medicine with significant evidence showing its support for hypoglycemic and hypolipidemic function as well as its bronchodilatory effects and note that it warrants further study.[5]

A 2019 study concluded that the antioxidant properties of the seed is gaining regard for its potential role as a dietary supplement with minimal side effects and has promising pharmaceutical and biological properties.[6]

The Nigellin ingredient in Princeton Vitamin’s formula takes this to a new level as it is a solvent-free, supercritical fluid extraction black cumin seed extract that is standardized to contain 5% thymoquinone.

Nigellin™ is a registered trademark of Sabinsa.

*These statements have not been evaluated by the Food and Drug Administration. This product is not intended to diagnose, treat, cure, or prevent any disease

These statements have not been evaluated by the Food and Drug Administration. These products are not intended to diagnose, treat, cure or prevent any disease.
Copyright © 2021
Princeton Vitamins LLC, 197 State Route 18 South, Suite 3000, East Brunswick, NJ 08816
848-466-3150 •  info@princetonvitamins.com. All rights reserved.